Today (Sunday) was the only day I made it down to the allotment this week, but what a day!

I arrived at the allotment at about 10am (quite impressive considering the clocks went forward last night!) and, for the first time since I took on the plot the whole place was busy.

Nearly every plot holder was there including my new other half. His name is Richard and he is taking on the other half of my plot. He seemed very friendly but, more importantly I now know who I’ll be sharing the shed with. The shed is pretty messy (fairly standard I presume – mud all over the floor, flower pots, gardening gloves etc on shelves, broken tools hanging around) but I was quite wary of moving anything around in there without checking with the other plot holder. Having spoken to Richard, we’re both happy for me to go through and start tidying it up. I realise I shouldn’t be this excited about tidying up a shed but, sadly I am!

I met Michelle, the lady who has the plot immediately behind mine. She told me she’s had her plot for 4 years and she’s never seen my plot looking so good – nice to know! She also said she’s been waiting to meet the person who’s done so much work on it. That was really lovely to hear because I often feel I’m not making much progress but, apparently I am.

Jane – the plot holder at the top of the slope helped me clear away all the garden waste into the correct bins – we filled all 4. She was an absolute star because she also helped to clear a lot of the bricks, rubble and decking from behind the rubbish pile (aren’t I lucky? I have extra rubbish behind my rubbish pile!) and helped me to turn the huge black tub which had all the garden waste in, upside down to drain away all the muddy water. I’m hoping to plant potatoes in the big black tub but I need to put some holes in the base of it first. Jane also mentioned how amazed she was that I’d managed to clear the extension (she didn’t call it the extension obviously! She just called it ‘that bit’ and pointed) I told her I’m pretty amazed aswell!

After Jane and I had cleared the garden waste I took 6 bags of rubbish to the dump. The eagle-eyed amongst you will notice the orange bucket is missing from today’s photos. It’s now in a metal container at the dump, I’m afraid. As sad as it is to see it go, I felt I had no choice!

After my trip to the dump I spent the rest of the afternoon weeding. Weeding really is an absolute pain in the…back isn’t it? It took me 2 hours to weed a patch of about 4′ square. It feels like there must be a quicker, less back breaking way, but I suspect it’s very much like preparing a room to be decorated – you just have to put the time and effort in to get a good result. I’m just optimistically hanging on to the fact that it will all be worth it in the end.

The rhubarb is growing surprisingly well. I’ve left the pot on it as we’re expecting snow again next week. 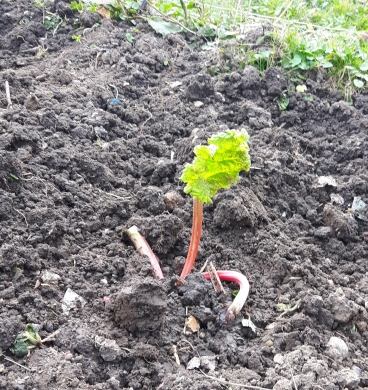 The robin showed up again today. I could hear him the whole time I was there and, after I turned over some earth he came down for some worms. I took a couple of nice shots of him. 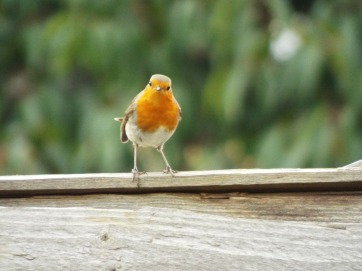 Overall, really pleased with what I achieved today.

Nice to meet all the other plot holders and great to know they’re willing to help me if I need it.