Rain! We have rain! After a heatwave for the last 8 weeks (the last time I mentioned rain in the blog was week 16) we finally saw the wet stuff falling on Friday this week and it’s rained for most of the weekend. 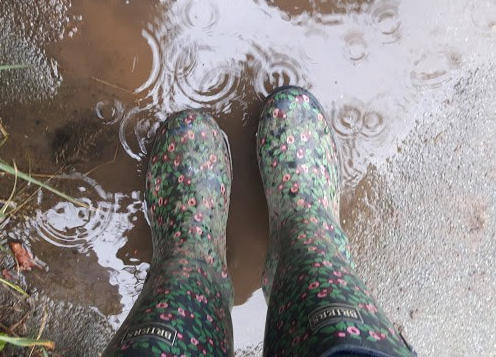 Going back to the beginning of the week, I collected a new waterbutt from my mum. I hadn’t asked her for a waterbutt she just told me she had 2 of them for me both with taps fitted. Cheers mum! It was still in the car on Tuesday afternoon when I offered my friend a lift home. Louis was not happy when he had to try and squeeze in next to it on the back seat!

It was far too hot to do anything on the plot during the day on Monday so I walked down in the evening when it was cooler. I did the most superficial weeding – I just pulled at the most obvious weeds, no digging atall. I spent lots of time watering – much easier now I’ve harvested the onions and potatoes, although the courgettes and squashes are proving to be harder and harder to water each time I visit. I have to climb my way through, trying not to step on them. The wooden plank I laid between the beds has all but disappeared under a sea of foilage. Any progress through is made all the more difficult because courgette and squash stalks (and leaves to a lesser degree) are spikey and they hurt. Not like a rose bush spikey but a bit like velcro and they hurt when you rub against them. It obviously hasn’t helped that I’ve been wearing shorts to the allotment so I’ve been walking into the courgette bed with bare legs. Anyway, you’ll be pleased to know I’ve been very brave and battled my way past all the courgette and squash plants to ensure the sunflowers and chrysanthemum have enough water. 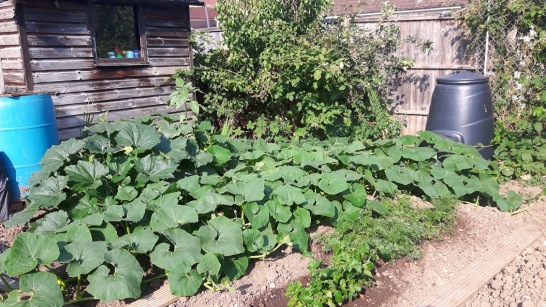 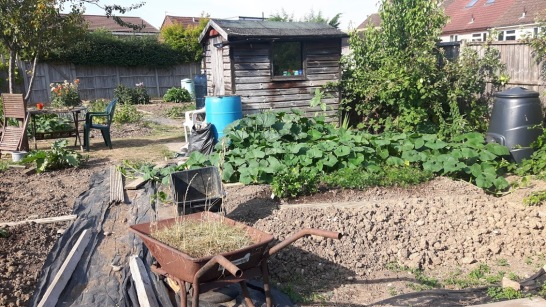 The winter squashes are, not only trying to strangle my carrots they’re also slowly but surely making their way across the path towards Rhubi. Obviously I cannot have this – carrots are one thing but do not mess with Rhubi. I’m going to have to investigate if it’s ok to aggresively prune winter squashes! 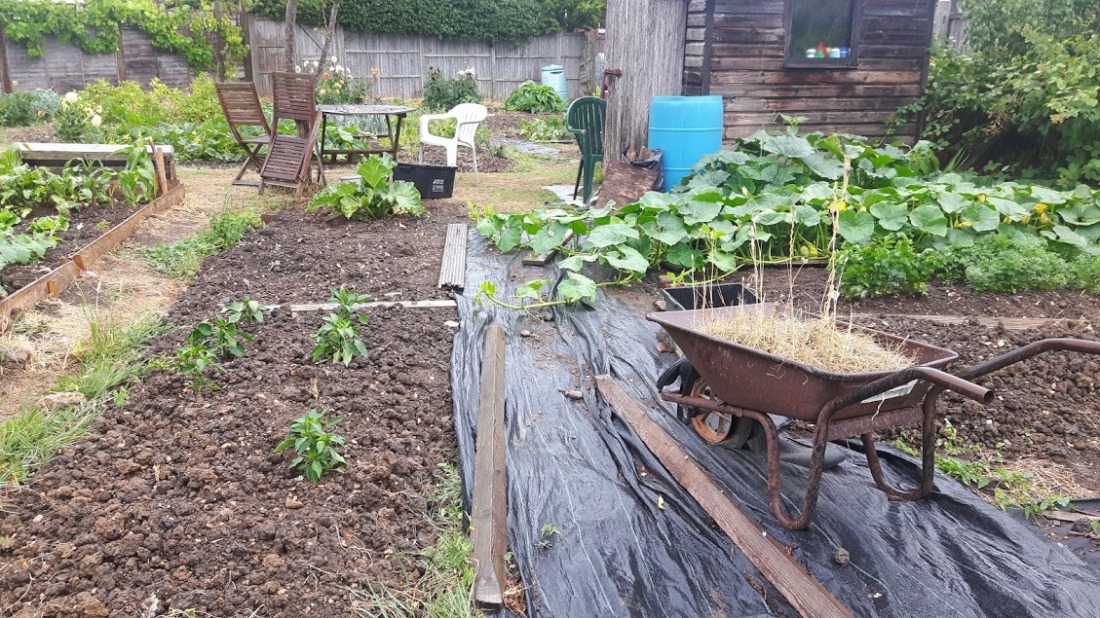 We have a pepper! It’s tiny but it’s ours. I suspect we’ve chosen a good year to try growing peppers – they clearly like the heat. Looks like my instinct about the flowers was correct which is great because a few of the other plants also have flowers on them so we can, hopefully look forward to more lovely peppers. Not at all bad for a packet of seeds chosen, almost randomly by Louis with neither of us having much of an idea about how to grow them. I really wasn’t expecting anything to grow so if we only harvest this one pepper I’ll be happy – although I realise one pepper isn’t exactly going to see us through winter! 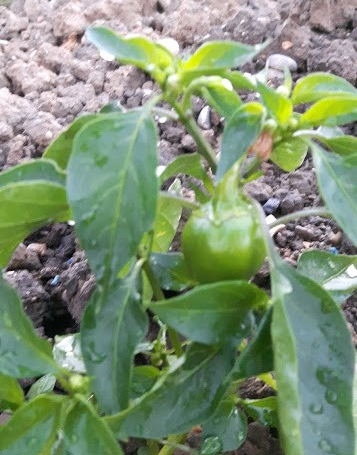 It was another very hot day on Tuesday so I popped down in the evening again just to water everything. It’s all so dry. Dan was there and he walked me round the shared plot pointing out how well everything is doing. 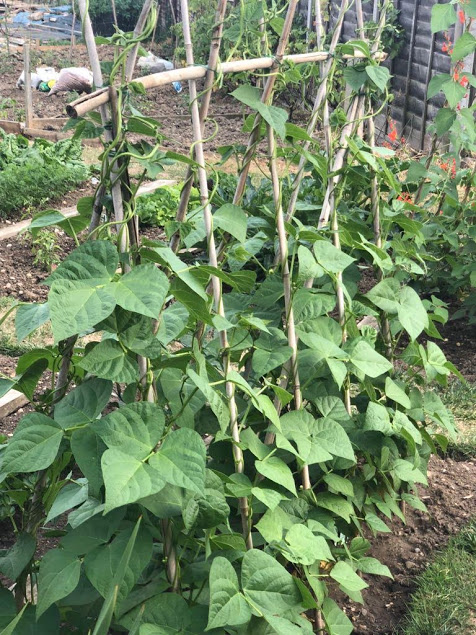 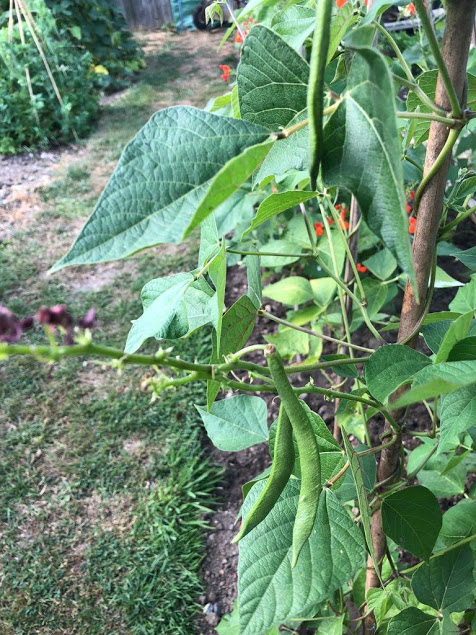 I harvested some carrots and blackberries. The carrots went into a curry and I tried a new cake recipe with the blackberries – blackberry crumble cupcakes. They went down very well at this week’s cafe and they are now on the list for the wedding we are catering next week. 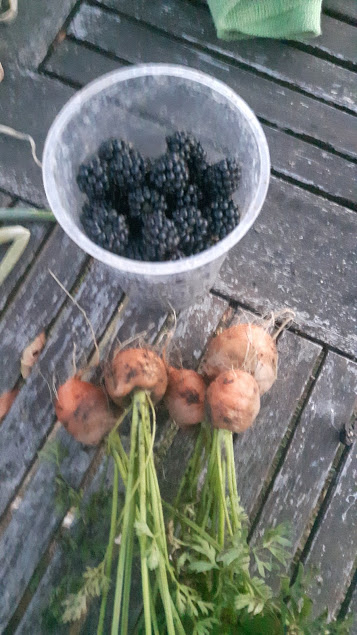 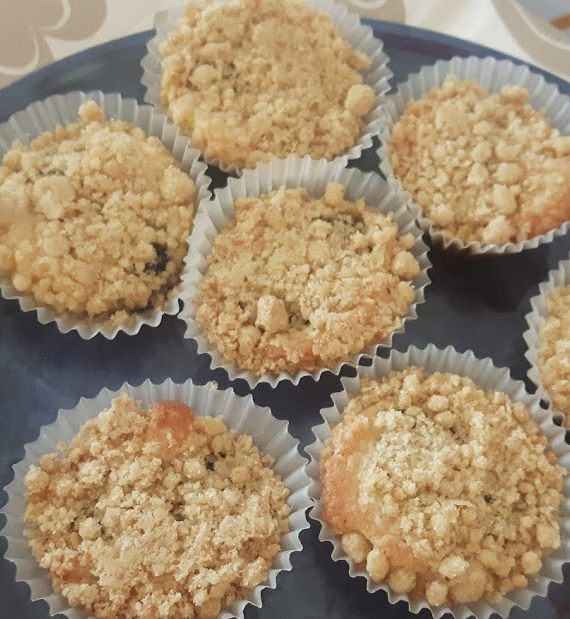 One of the great things about having an allotment is it makes you slow down and notice nature. This is what the sky looked like on Tuesday evening – beautiful. 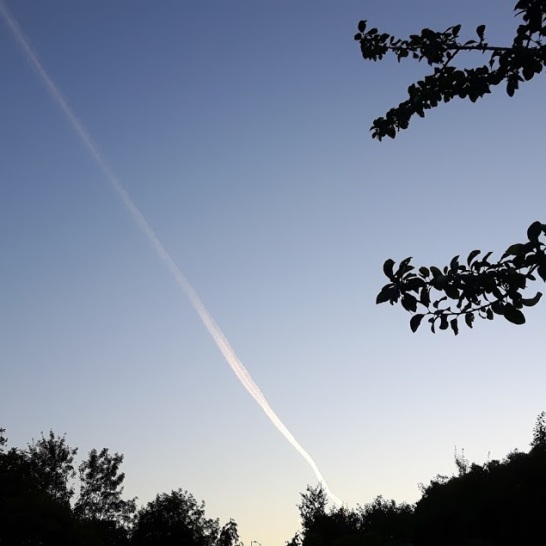 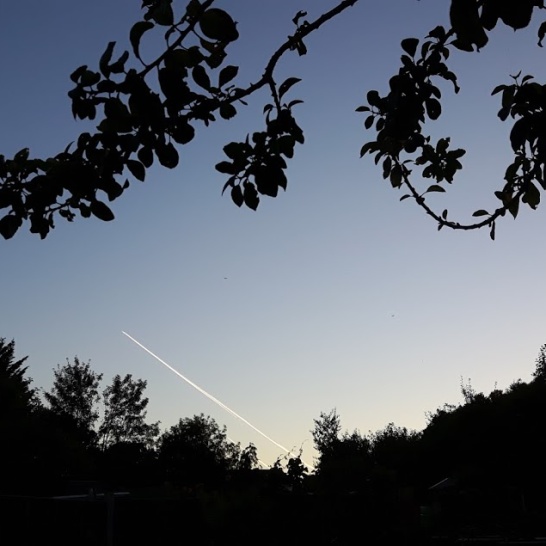 On Wednesday, Louis and I collected the second waterbutt from mum’s. Michelle’s going to have this one as a replacement for her one which has sprung a leak. Louis helped me carry it to the plot. That was all we managed on Wednesday – it was just too hot on the allotment to do any work down there.

Thursday was another evening visit. Dan was already there watering the shared plot. I watered my plot and, following Dan’s instructions planted 4 brussel sprout plants he’d given me. I planted them next to Rhubi in the bed the onions have recently vacated. Doesn’t look like much now but, as I’ve learnt, plants grow! 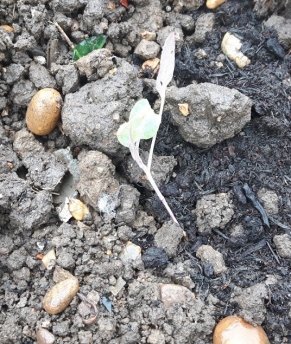 It was another gorgeous evening – really warm and still light at nearly 10pm. Dan and I sat and chatted for a while about what’s been happening on the allotment while I was away (we have 2 new plot holders) and I gave him the presents I’d bought him in Cornwall as a thankyou for looking after my plot – some Cornish fudge and a little recipe book with recipes for allotment veg.

The rain started late Friday afternoon while Louis and I were at running club. Not sure it was enough to make much of a difference to the allotment but it was a blessed relief walking round the track and it was, at least enough to clear the air a bit. I was super happy about the rain until I remembered I’d left the onions outside to dry – they’re definitely not dry now! (They are now in the dry in Michelle’s shed – she rescued them when she saw them being rained on – thanks Michelle x)

I didn’t make it to the plot on Saturday. I’d planned to go after the cafe but by the time I’d finished what I needed to do (I had cake ingredients to collect for the wedding next weekend) it was raining really heavily. So, I was pretty determined to get down there on Sunday. Obviously I didn’t need to water anything but I’ve been wanting to tackle all the weeds that grew while I was on holiday, especially a patch next to Rhubi. I was hoping to clear them in one go but it started to rain quite heavily as I was working so I had to abandon my efforts and take shelter in the shed. Not only was it raining but the wind was pretty strong – so strong infact it blew the shed door closed with such force that I struggled to open it from inside. For a few seconds I was quite worried I wasn’t going to be able to open it and I’d be stuck in there. AA was uncharacteristically unhelpful and suggested I could have phoned the fire brigade to rescue me. As I say, not the most helpful suggestion – remind me never to call AA in a crisis! This was my view from the shed during the downpour. A lady on Instagram said it looked like ‘a beautiful impressionist painting’. I think she’s right – I may have managed to make a wheelbarrow and a waterbutt look pretty. 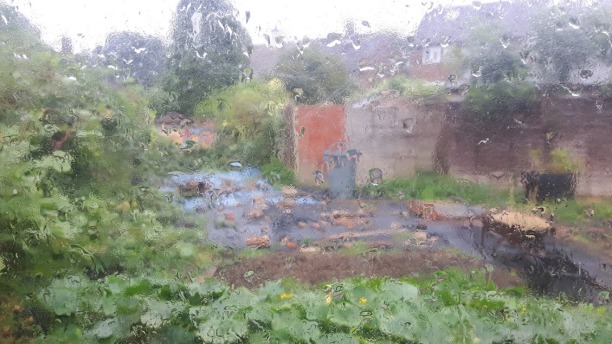 Here’s the obligatory photo of Rhubi, although I don’t think there’s been much change this week. 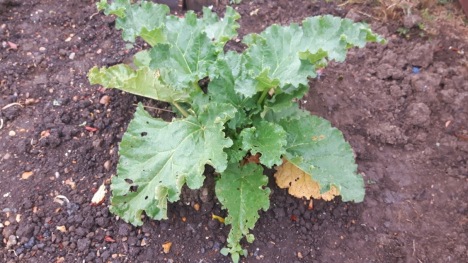 Here’s what the plot looked like when I left it on Sunday afternoon. AA has said, now there’s been a decent amount of rain after all that sunshine all the plants will just grow like crazy so I’m expecting big changes next week. 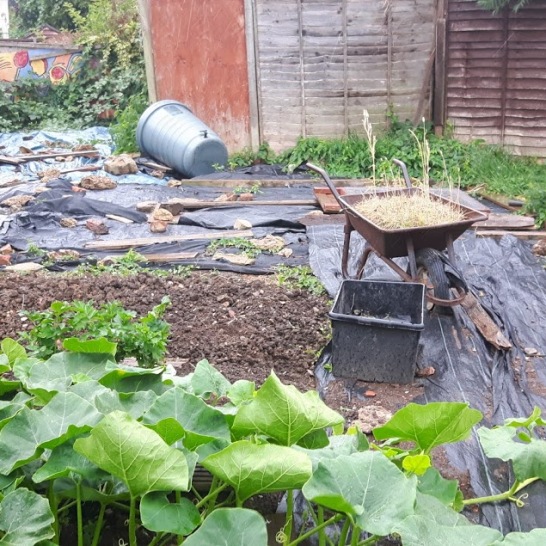 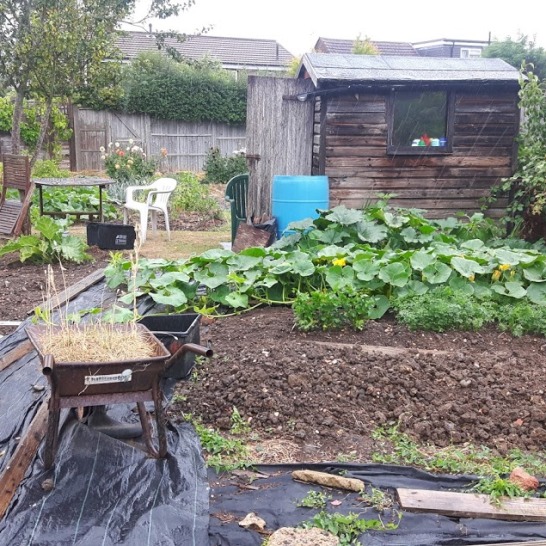 3 thoughts on “Week 24 – Wellies and Waterbutts”