We did it! We catered a wedding!

One way or another it feels like I’ve spent most of the last week in a kitchen, either making cakes, decorating cakes or helping to prepare curry and all the bits to go with it. We had some obstacles (the main one being a burst water main resulting in no running water from about 12 noon to 6pm – it came back as we were serving the curry) but the bride and groom were really happy with the food so that’s all that matters. 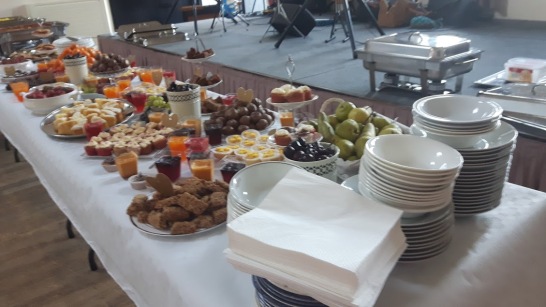 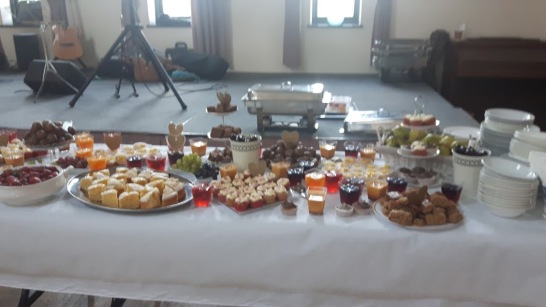 All the wedding preparations mean I haven’t had much time to work on the allotment. I was able to get down there on Monday and Tuesday before all the serious baking started (and by ‘serious baking’ I mean about 400 cakes). I headed down there at about 9am on Monday. No need to water after all the rain at the weekend so I just weeded. I carried on clearing the weeds around Rhubi. Louis even dragged himself away from his DS and joined in. We pulled up a couple of really big roots – still so satisfying! I thought the weeding would be easier after all the rain but the soil was so dry after so many weeks of no rain the moisture had only penetrated the very top layer and the soil was still dry as a bone underneath. 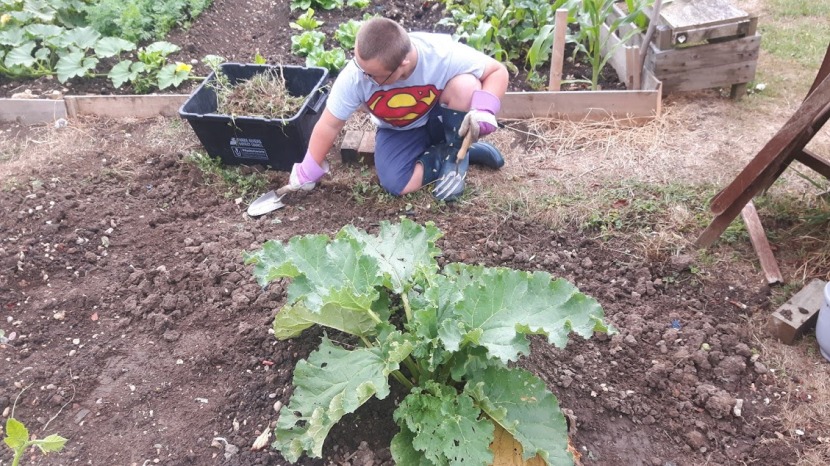 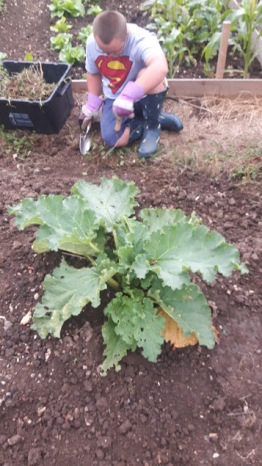 One of the sunflowers took a bit of a battering over the weekend with all the wind and rain and it was leaning over at quite a jaunty angle. Michelle gave me a piece of bamboo cane to use as a stake. It looks so much better now it’s upright but still no actual flowers, although, to be fair after the waterbutt landing on one of them I always feel quite lucky to have any sunflowers at all. 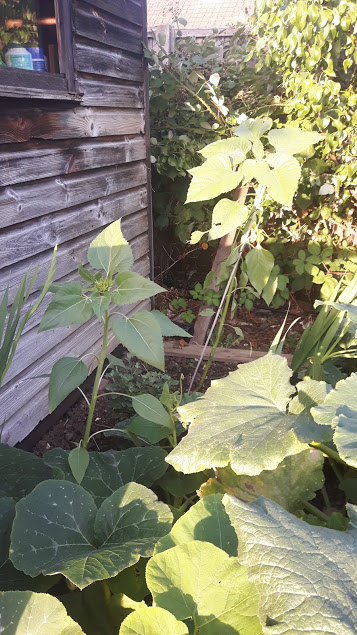 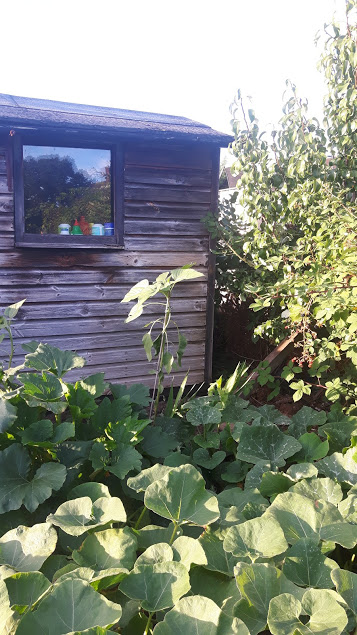 The peppers are doing wonderfully well. There are lots of flowers on the remaining 6 plants and we have a couple of new peppers. I’m not sure if they’re going to stay green or if they’ll change colour as they get bigger (I hope so because green peppers aren’t our favourite) 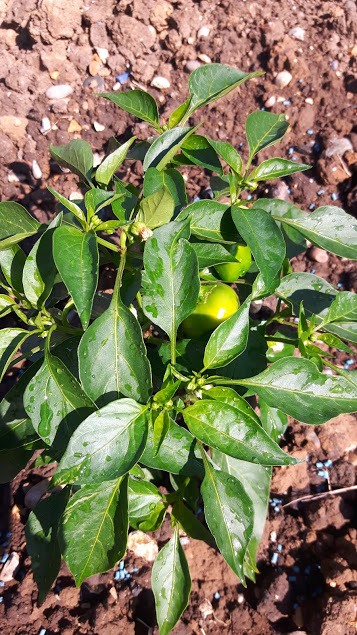 On Tuesday I spent an enjoyable couple of hours in the evening harvesting lots of vegetables to use for the wedding. I picked sweetcorn, 3 marrows, peas, runner beans, cucumbers, carrots and a squash. This wasn’t the only time in this last week that I wished I had a bigger kitchen! 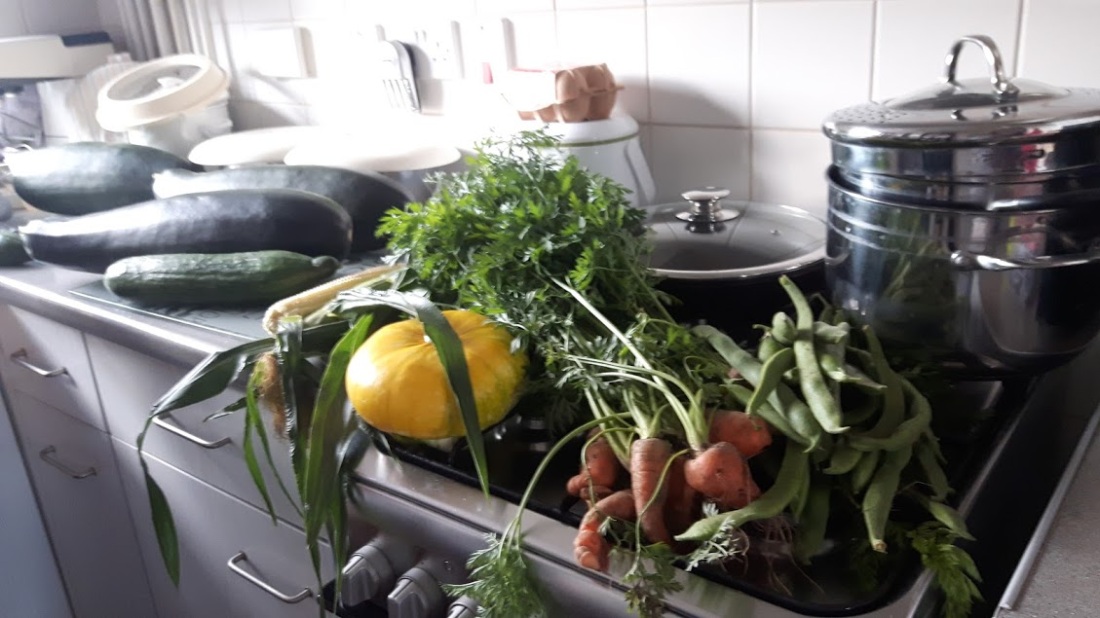 On Thursday Jane from Random Cafe and I visited another local allotment to collect some fruit and veg to use for the wedding. Jane had put a request out on social media for help as we weren’t sure we would have enough. We met the guy who runs the project plot over there and he showed us what we could take. We picked blackberries, chard, a pumpkin, potatoes, rhubarb, a squash and some rocket. 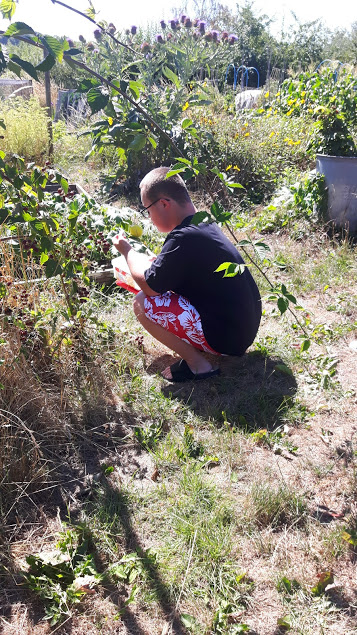 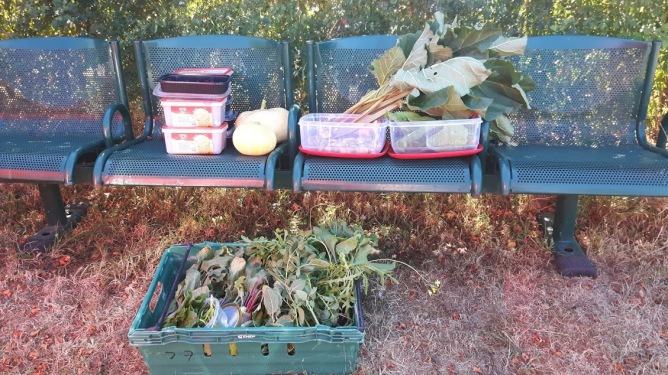 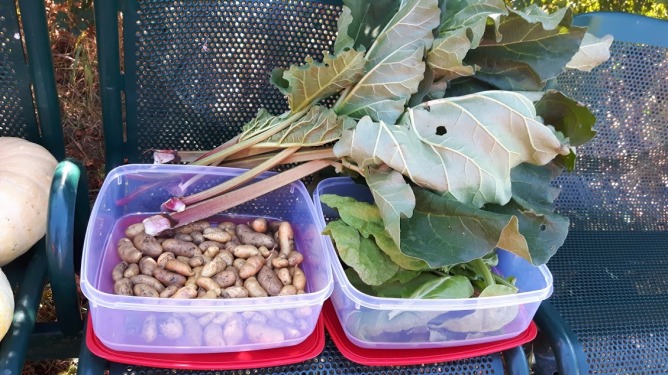 On the way back we popped into my plot and harvested some more peas and another squash. I know it sounds like a huge amount of veg but we had to make curry and vegetable lasagne for about 130 people.

Friday and Saturday were long, tiring days spent at the wedding venue prepping and serving the wedding meal, so there was no spare time (or energy!) to work on the allotment. It gave me a lovely sense of satisfaction, though to know some of the vegetables I’d grown on the plot were being used – they were used in all 3 courses.

On Sunday morning I was awake surprisingly early considering how exhausted I felt after the wedding, and I was on the plot by 9am. Everything needed watering – it all looked a bit neglected. I’ve been really concerned about all the weeds growing round the edge of the plot so I took the shears to them. I didn’t pick any of them up, I just left them where they fell. I’ll pick them up next week but, straight away, even without picking up all the cuttings the plot looked tidier (there’s a site inspection coming up – can you tell?!) 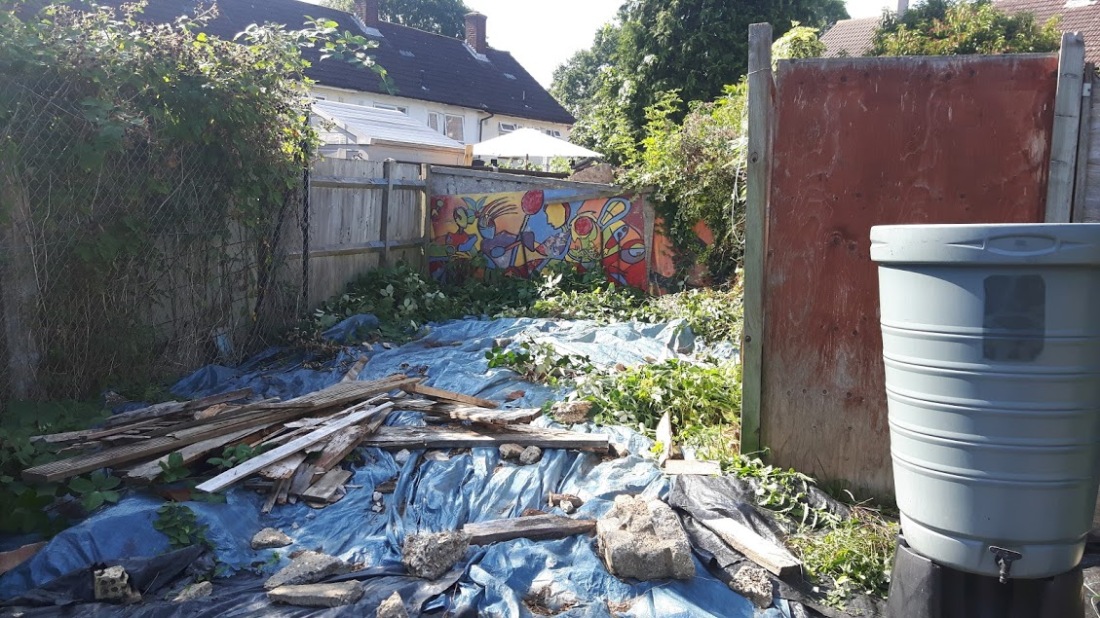 Rhubi is getting huge. She needs very little maintenance now but I did take some drastic action to save her from the creeping winter squash – I pruned it. I’m saying ‘pruned’ – in reality I just cut the end off the bit that was heading towards Rhubi. 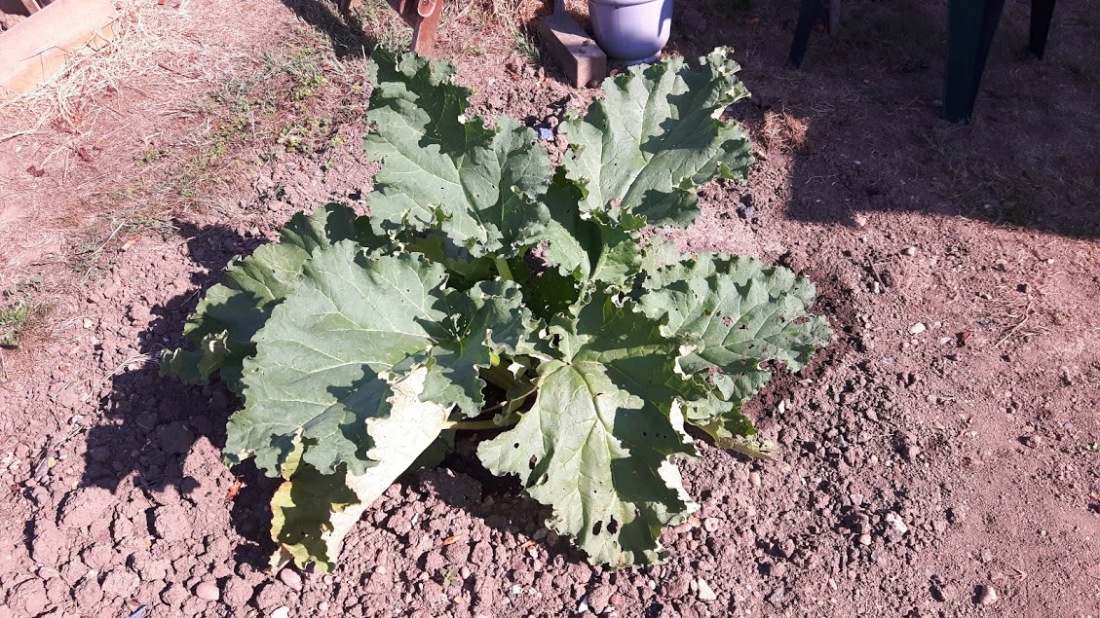 The carrots and parsnips seem to be doing ok. Not ready to harvest yet though. 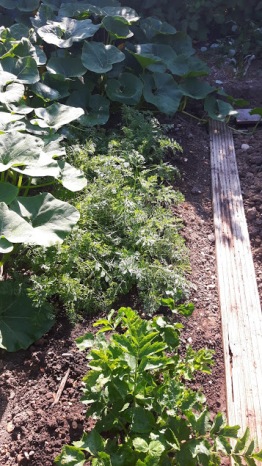 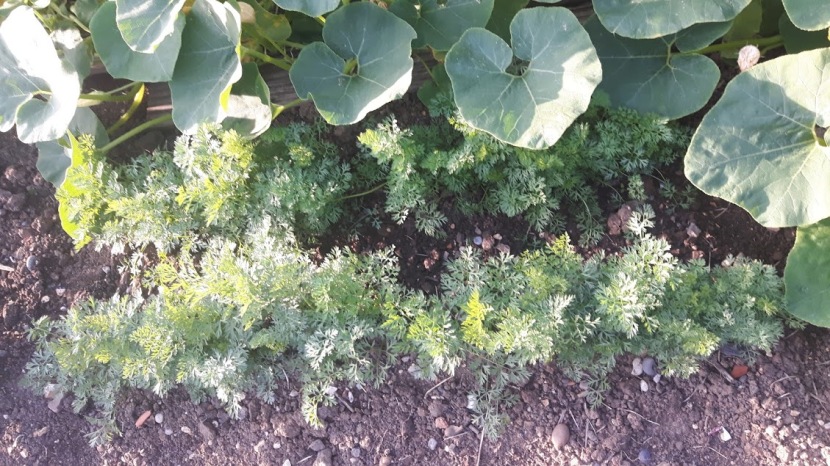 I have squashes! I harvested the butternut squash today and I’m looking forward to making a soup with it (I think I may have mentioned butternut squash curry in previous posts but I’m not sure I can cope with making more curry after the wedding!) These 2 squashes have come from the 2 plants I bought at the open day we went to a while back. The labels called them ‘winter squashes’. I was expecting the plants to produce the same type of squash – clearly that assumption was a mistake because they have definitely not produced the same vegetables. I don’t even know what the yellow one’s called (I know Michelle told me but I can’t remember) This is, obviously a thing in gardening circles because Dan and I bought 2 butternut squash plants from the garden centre that are definitely courgette plants! 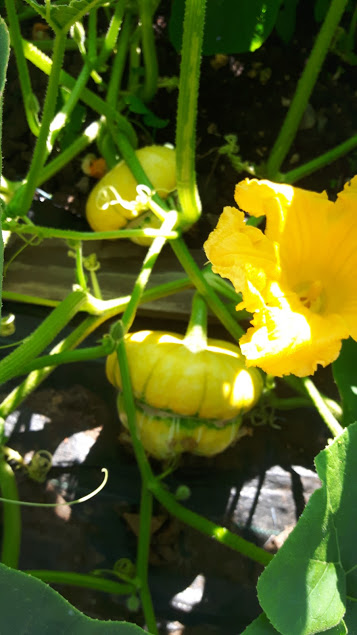 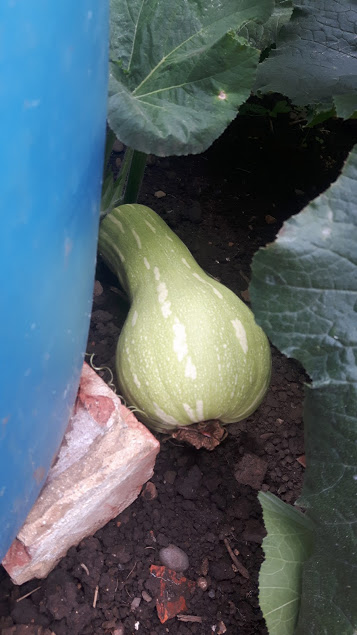 One of the main things I’ve learnt so far is how much room courgette and squash plants take up! I had no idea they would spread out as much as they have. I am definitely going to do a plan next year and the plan is to leave a lot more space for the courgettes and squashes (and to grow them far away from Rhubi!) Obviously, I’m hoping to have the whole plot dug and weeded by the time I start to plant next year so I’ll have a bit more choice about where to put everything – I’m thinking the extension, at the back of the plot away from everything else! I’m also thinking about building a frame for them to grow up (and of course, by ‘building a frame’ I mean getting someone else to build a frame for me!) 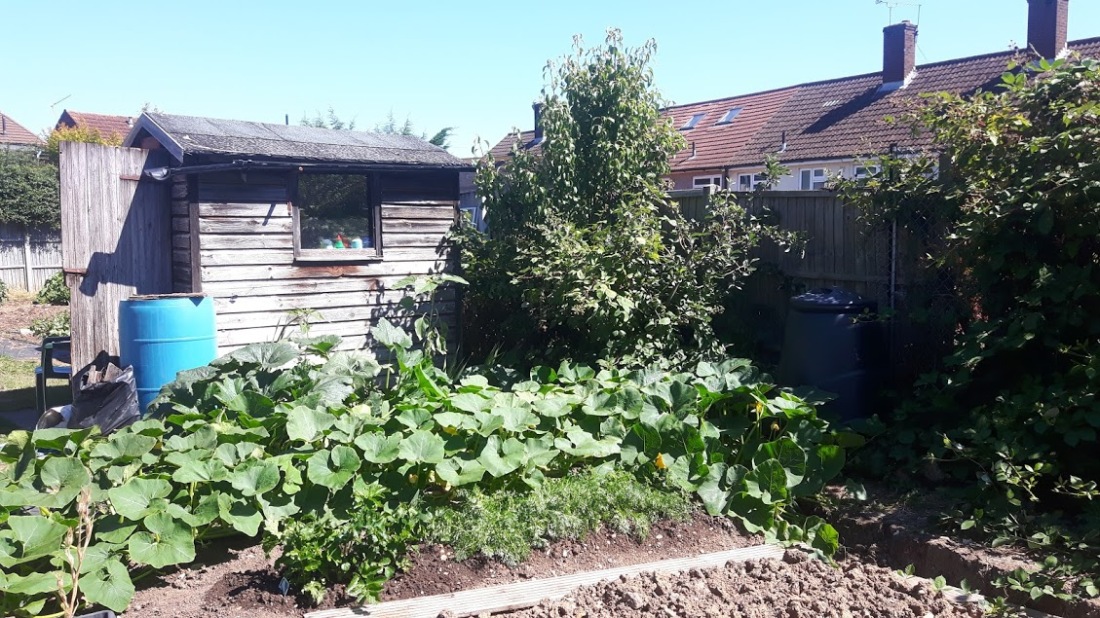 So, after a week of not doing very much on the plot, this is what it looks like. I’m really hoping I can make it down there a lot more this week and I’m hoping to clear all the rubbish and get it to the dump. 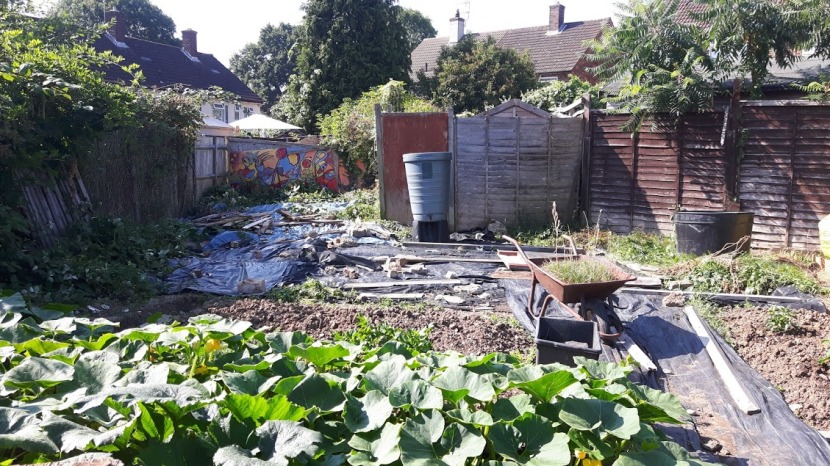 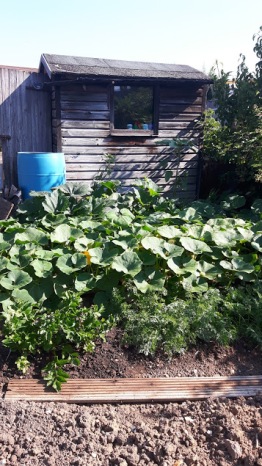