Not loads to report this week as I haven’t been on the plot much. Instead, I’ve been organising my son’s 18th birthday party (I, stupidly decided to make all the invitations myself) and my work leaving drinks (I handed my notice in last week) However, despite not being down there very much some changes have happened.

I harvested some carrots – some of them even look a reasonably decent size and most of them are straight (not supermarket straight but straight enough for me to be able to peel relatively easily). I also rescued a small Turkshead squash. It’s too small really but it had already come away from the plant so it had to come home with me. We are, officially, as of yesterday in Autumn so it’s time for me to make hearty, warming soup. Autumn is, without doubt my favourite season – I love the colours and the bright, crisp mornings. I’m really looking forward to Autumn on the allotment. 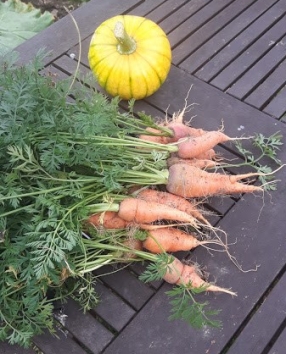 The squash bed is looking decidedly worse for wear yet, somehow is still producing squashes. I counted 6 Turkshead (could this be the couregttes all over again?!) and 4 butternut squashes when I was there yesterday. Moving the plant around a bit last week doesn’t seem to have done any lasting damage as far as I can tell (apart from, maybe separating one of the squashes from the plant!) as it all seems to be growing beautifully. Butternut squash soup coming up in the next few weeks.

You may remember last week I picked up some green manure seeds in the seed sale at the garden centre. This week I’ve sown them. They’ve gone into the empty bed next to the carrots and parsnips. I didn’t even need to water them as it started raining just as I finished raking them in. No plans yet as to what will go in that bed next year but the soil should be good enough for whatever I decide.

I’ve re-covered the brussel sprouts. They appear to have survivved their few days of braving the elements (and butterflies) but I didn’t want to risk it for any longer than I needed to as there are still a fair few Cabbage White butterflies flying about. Some of the leaves have definitely been nibbled but the majority look untouched.

The parsnips have started to show their tops. Michelle has told me I mustn’t harvest before the first frost if I want sweet parsnips. I am so pleased I’ve managed to grow parsnips. After the disappointment of the seeds not germinating I’m so pleased to have grown them from plants. Thanks Michelle for giving me the plants. Definitely growing more next year as parsnips are one of my favourite vegetables.

We had some pretty strong winds in the UK this week and the sunflowers took a bit of a battering. The taller one was on its side when I arrived on the plot the other day. I had to climb over the squash plants (must make a better plan for next year!) and re-stake it. It’s looking great as it’s produced lots of smaller sunflower heads. I know my sunflowers aren’t the tallest on the site but I’ve thoroughly enjoyed watching them grow and anything that encourages bees has to be a good thing to grow.

I picked the pepper! It’s not the biggest or prettiest pepper ever but I don’t care – it’s ours! I’ve just made a bolognese sauce with it along with the tomatoes and an onion harvested from the shared plot, to go over my Quorn fillets. I have to say, I am still in absolute awe that we’ve grown anything atall let alone peppers that have gone into tonight’s dinner.

The rest of the peppers are doing rather well too. There are now too many to count and we have 3 orange ones. We will be growing more next year and hoping for the same success as this year.

Rhubi is enormous! Aswell as rhubarb gin I have also discovered raspberry gin and strawberry gin, both of which are delicious. Next year could be very busy on the gin making front.

For those who were hoping to have escaped the fascinating subject of digging this week, apologies, I’m about to go there (you can skip this part if you really don’t think you can take the excitement!) Not much digging this week, just a bit at the end of the pepper bed. There were a lot of weeds and I dug up, possibly the biggest dandelion weed so far. There really is a wonderful sense of accomplishment when you pull up a weed with really deep roots – so satisfying. Didn’t find anything else though, just the normal pieces of glass and general rubbish. I really feel like I’m just delaying the inevitable – starting to dig over the extension. I know it has to be done eventually but it just feels like such an immense task I’m almost scared to start it. There aren’t many small jobs I can be getting on with on the plot now so it’s time to just get on with it. It’s going to involve lots of time, manual labour and trips to the tip but I can’t avoid it any longer. 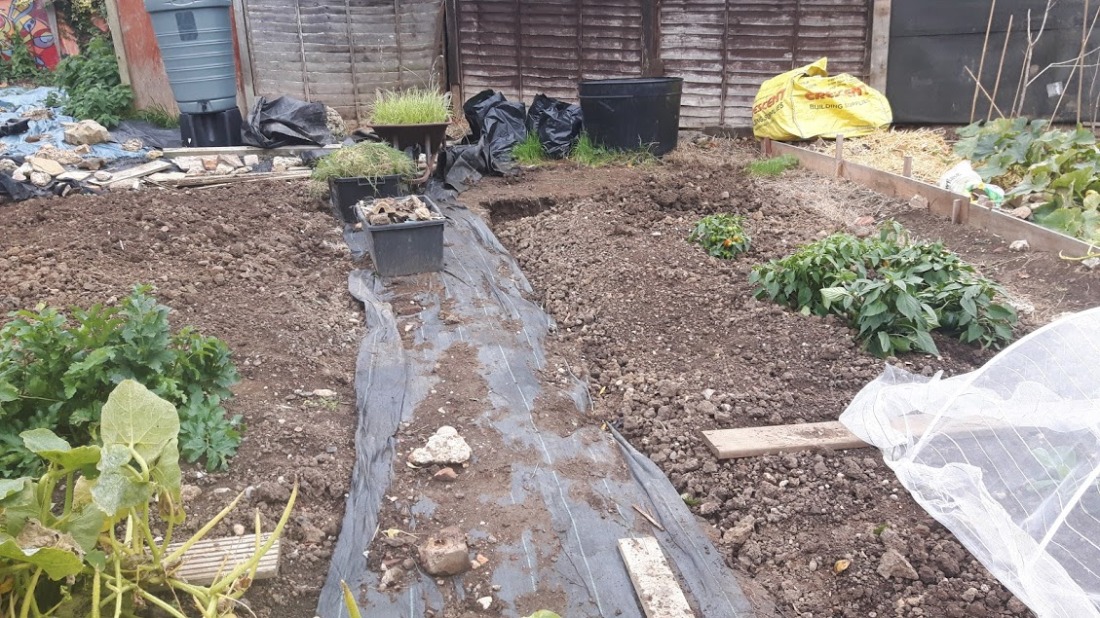 I’ve received an email from our allotment association thanking us for maintaining our plots this year. Our site was also singled out as the ‘best use of majority of plots’. Go us!

The robin’s back! I didn’t have my camera with me so the photo isn’t great but so pleased to see him and really pleased he was able to find some worms in the area I had just dug over. Hopefully you can spot him. From now on I must remember to take my camera to the plot. 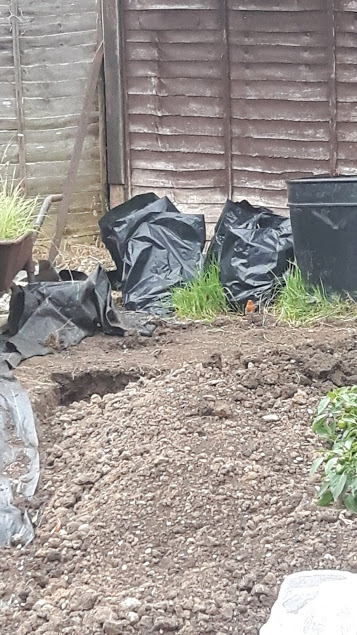 I had planned to spend some time on the plot today but I woke up to heavy rain which continued all morning and into the afternoon. I could have gone when it brightened up later this afternoon but I went to the pub instead (gotta get my priorities straight!)

This is how I left the plot this week. 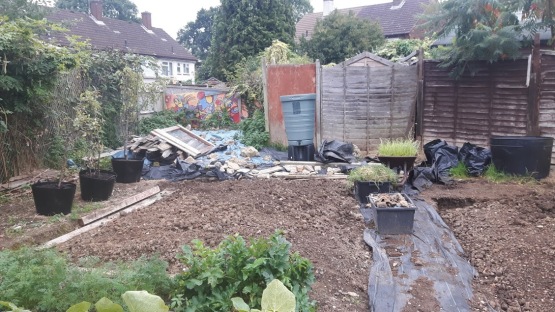