It’s going to be short and sweet this week – mainly due to not much progress having been made, which is mainly due to me not having spent much time on the plot (again).

We have harvested quite a lot of veg this week. Louis picked his first peppers today. He looks super proud and, as a friend pointed out, he looks much happier than in the Harry Potter photos (should have saved myself £40 and just taken him to the allotment to harvest peppers!) 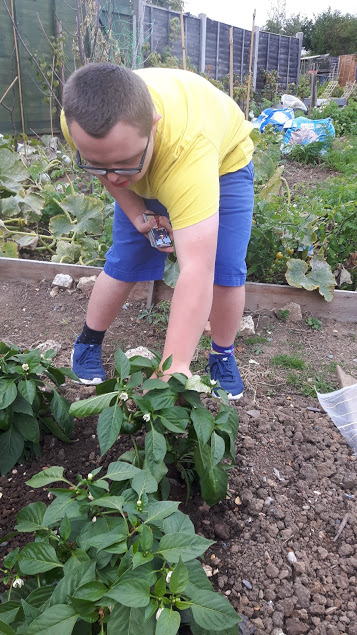 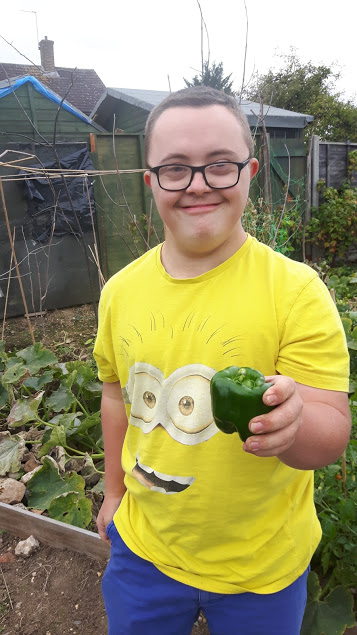 I’ve pulled up all the carrots now and most have been turned into soup. I’ve also picked onions, peppers and squashes.

One of the peppers (not picked by Louis) has turned red. I am ridiculously excited about this and I’ll be keeping a close eye on the plant to see if any of the others do the same. As you can see it’s turned a really vibrant shade of red and there are still loads of peppers left on the plant so my hopes are high for lots of red peppers.

Louis was really helpful on the plot today (in shock news he didn’t sit in the shed atall and his ipad and DS were nowhere to be seen!) He lifted the weed membrane and put the rubbish in the rubble sacks by himself (I was off chatting to Dan) He then stood with a rubble sack while I dug so I could chuck any rubbish straight into the sack. We have acquired a fair few extra rubble sacks today all ready for the tip when I have the time and energy to take them. This has to be the most soul  destroying part of this whole project – disposing of other people’s rubbish, but if I want the plot to look good and, more importantly be productive it just has to be done. 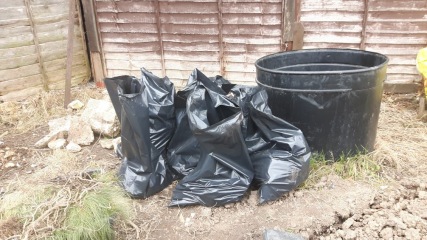 Today was another digging day (no change there then!) Between us Louis and I have dug and weeded another strip of ground at the end of the green manure bed. We’ve now nearly reached the water butt which is where the new path will be. One more digging session and I’ll have no choice other than to start on the extension area (I’ve been putting it off for weeks now, I know!) Despite what I thought was a very generous offer of beer last week no one has taken me up on it so it looks like I’m on my own. To be fair, I prefer it that way. I took on this project on my own and, apart from some help to cover the plot and some ongoing help and advice from the other plot holders I’ve done the bulk of the work myself which I’m very proud of.

Rhubis’ doing well, the brussels are looking good, squash bed looks absolutely appalling but the squashes are all looking good which is the main thing. No growth from the green manure yet but I may be being a bit optimistic to expect any growth so soon. 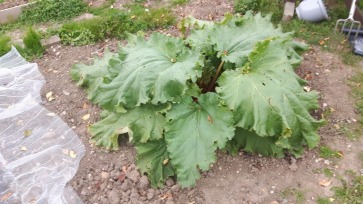 I met Dan on the plot today. He’s been clearing the shared plot and we spent some time dividing up the tomatoes, squashes and sweet corn – he tried to persuade me to take a marrow but I wasn’t falling for it! I managed to leave the tomatoes behind – hopefully they’ll still be there tomorrow but there’s a strong possibility they’ll be snaffled by an animal overnight because they’re just on the table outside Dan’s shed. Doh!

The site looks so different now because, like Dan everyone’s clearing their plots for winter. All the bean supports have come down and most of the sunflowers have gone so all the height on the site has disappeared. We still have parsnips, onions, leeks and aubergines to harvest on the shared plot but it really does feel like we’re on the countdown to winter now. So my first growing season is nearly over and I’m really quite pleased with what I achieved. Happy to have grown so much and I’m in a great position to have the plot completely dug over and ready for next year. Still lots of hard work ahead of me though and lots of planning to be thinking about. Here’s how I left the plot today. 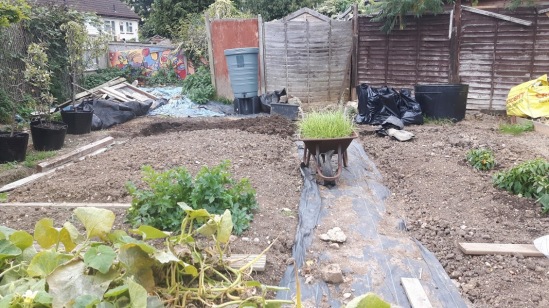