We’ve had quite a productive week this week both on and off the plot. We’ve cleared rubbish, sown seeds, weeded and helped to organise and run an Afternoon Tea event.

After college, on Monday Louis helped me move all the remaining wood from the plot to the car and then to the tip. I now have no more rubbish on my plot! We’ve removed 47 bags of rubble and over 20 bags of assorted other rubbish in the last year but I think (hope!) that’s the last of it. 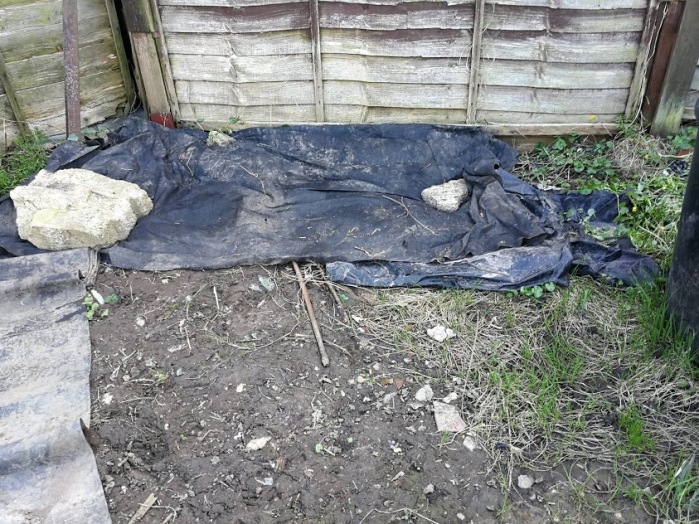 After my little wobble last week about the bindweed I’ve tried to just tackle it as best I can concentrating on small areas at a time and trying not be too intimidated by thinking about the whole plot. Helper number 2 helped me clear a small area after college on Thursday. It really was a very small area but my thinking was, better to concentrate on a small area and really clear all the bindweed from it than try to overstretch and do a larger area not so well.

We also found some time to plant some seeds (I know, I’m very late but we are where we are and if they don’t work I’ll just buy some plugs) My 2 helpers started with the sweet peppers and pumpkins. I was surprised (and more than a little impressed) to see Louis making small holes in the compost with his finger to drop the seeds into. I don’t remember ever showing him how to do this so I can only imagine it’s something he picked up from school. They did really well between them and planted all the seeds which are now on my windowsill (sweet peppers) and in the shed (pumpkins) eagerly awaiting shoots. 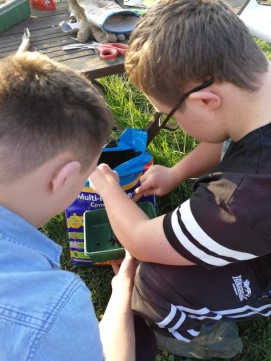 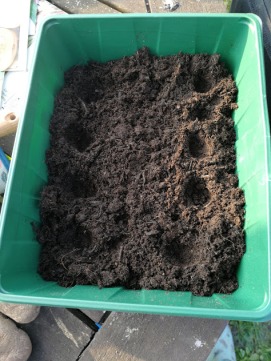 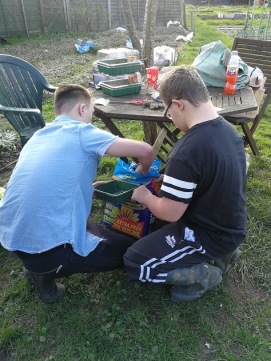 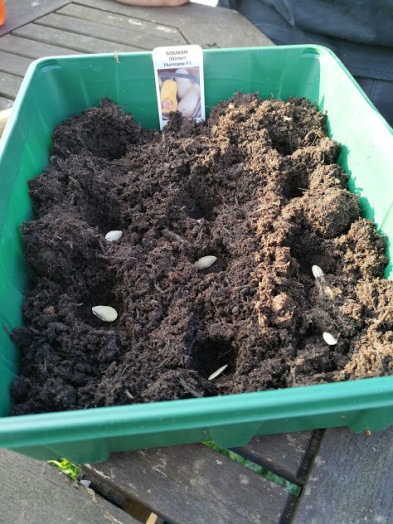 Louis and I went shopping on Thursday. He was keen to buy his step mum a present for Mother’s Day and was adamant she’d like a cake making book. So, off we toddled to WHSmith to have a look at their selection of cookery books.  As we were looking it occurred to me, Louis’s stepmum has never struck me as a cake baking sort of person. So I sent a message to Louis’s dad asking him if a cake making book would be an approprite gift. Message I received back was ‘She’s never baked a cake in her life’ We popped next door to Boots and picked up some nice socks and bubble bath! However, WHSmith wasn’t a complete waste of time because while we were in there I spotted a book called ‘Veg In One Bed’ by Huw Richards. I’d seen a couple of people talk about it on Instagram and I thought it looked interesting so I treated myself (early Mother’s Day pressie?) I Instagramed it and received a lovely comment from the author thanking me for purchasing it. I have to admit to not having had the time to even flick through it yet but it’s currently on my bedside table waiting to be picked up and I’m sure I’ll enjoy it when I do.

Running club was cancelled on Friday so instead, Louis and I stopped at the allotment on the way home. Louis helped me plant some more seeds – spring onions and leeks this time. I did a bit more weeding but not much else. It was just nice to be outside in the sunshine. Richard (my other half!) was there. First time I’ve seen him on the allotment this year. He’d come down to rotivate his plot. He arrived around the same time as us and left about 10 minutes before we did. He rotivated almost his whole plot in that time – I weeded about 1 square foot! I think I may be doing this gardening thing wrong! Actually, it just shows how different people garden differently. For me it’s all about enjoying being outside, the process of gardening and learning. I think for Richard it’s about achieving the fruit and veg as quickly and efficiently as possible. Each way is totally ok (but I wish there was a faster way to weed!)

On Saturday, Random Cafe held an Afternoon Tea event at our local museum. We served 28 people tea, coffee, prosecco, scones, cakes and sandwiches and it all went really smoothly. I made some of the cakes so I spent most of Thursday and Friday baking and, on the day I was in charge of making the tea and coffee. A huge thank you to  the staff at Watford Museum who welcomed us so warmly into their beautiful building and helped make the day such a success and a shout out to all the Random Cafe volunteers who, yet again turned an idea into a wonderful event enjoyed by everyone who attended.

Rhubi is already showing a strong start. I’m allowed to harvest her this year – she’d better taste good after all the effort I’ve put in to looking after her! 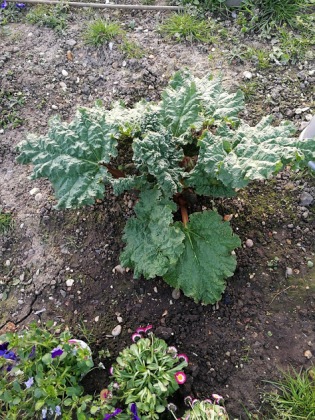 The alliums are showing signs of flowering. I’m really looking forward to the colour they’re going to bring to the plot. It feels like a long time since there’s been anything other than brown on the allotment. Richard was really impressed with our huge onions until I told him they’re Louis’s Alliums planted in amongst the onions (he seemed less impressed by this!)

In the UK the clocks went forward yesterday morning which meant an hour less in bed but sunset about an hour later at 7.30pm This, of course means I am able to spend more time on the plot and I get to see sunsets like this.

I had hoped to make it down there this afternoon but we took mum out for Mother’s Day lunch and then drove over to the garden centre (yes, I bought plants!) and by the time we’d finished it was too late, but here’s how I left the plot on Friday.

One thought on “Week 59 – Afternoon Tea and Alliums”