You’ll be pleased to know, despite what I wrote last week, I’ve had no accidents – freakish or otherwise. This week has been very similar to last week in as much as I haven’t spent very much time on the plot – this week due to the weather. We’ve had a lot of rain. Of course, the plus side of this is I haven’t had to worry too much about watering.

We had a dry day on Tuesday so I took my 2 helpers to the plot. I bribed them with cake and they did all the work while I  ate my lunch – seemed like a good deal to me!

There really isn’t loads to do on the plot at this time of year so my helpers just did a bit of watering and despite the disaster with the sweetpeas I even let them do some weeding. While we were there we spotted one of the gladioli flowering and the first signs of the pumpkins. 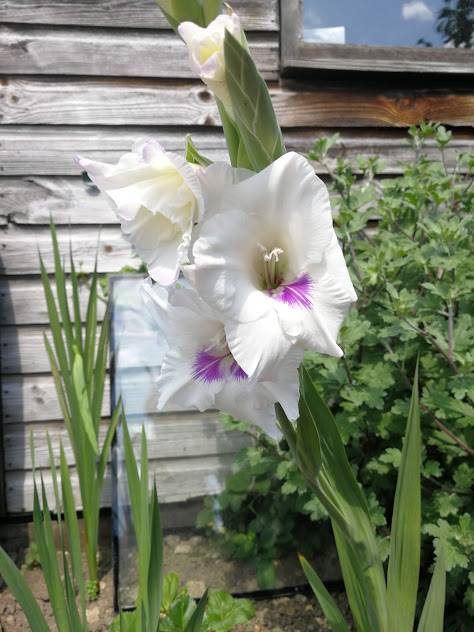 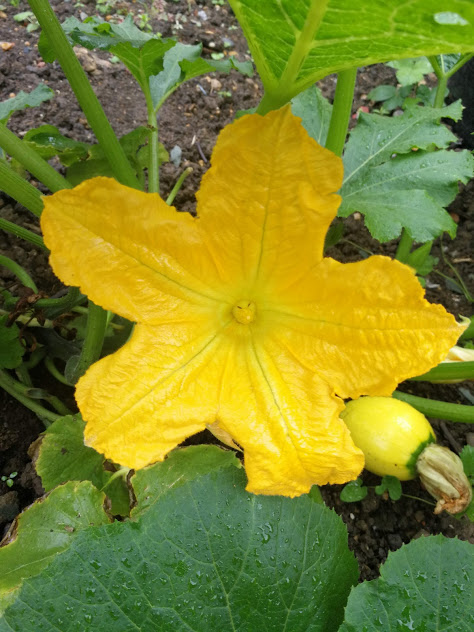 As some of you may know, Louis is a huge fan of sharks and enjoys anything shark related. At the garden centre with Michelle on Wednesday we spotted this shark which Louis just had to stick his head in!

On Thursday our local cinema showed the original Jaws. This is, possibly Louis’s favourite film and although we’ve seen it hundreds of times, including at Regent’s Park Open Air Theatre we’ve never actually seen it in a cinema. Helper number 2 wanted to come with us so we had an allotment outing to the cinema and thoroughly enjoyed ourselves. These are our scared faces! 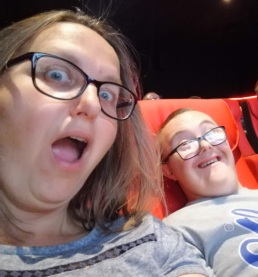 Saturday morning was dry so I took the opportunity to pop down to the plot and do some weeding and general tidying. I arrived to find the solitary flowering gladioli on the ground. A piece of cane and some string soon sorted her out and she was vertical again in no time. I expect I’ll have to do the same for all the other gladioli – beautiful but high maintenance! 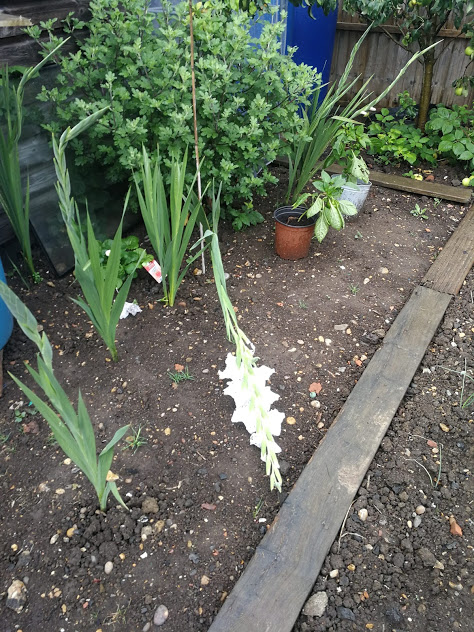 While I was at it I staked the pepper plants too. I couldn’t do every plant as I ran out of canes – a job for next week. 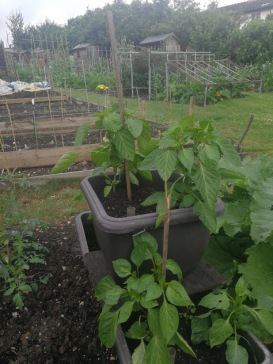 The pumpkin plants were noticeably bigger and I counted at least 4 pumpkins on just one of the plants. The squashes aren’t showing quite as much growth. It occurred to me this may be because they don’t see as much sunlight as the pumpkins due to the boards I placed across the tread of the ladder. The idea of the boards was to give the squashes some support as they grow but if they’re hindering their growth I think I’ll remove them and replace them if/when I need them. 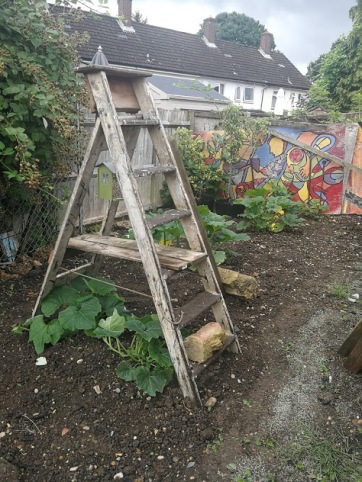 There’s a flower on the strawberry/raspberry hybrid plant (I’m going to have to come up with a shorter name!) While I understand it won’t give me a bumper crop this year I’d like to be able to try at least one fruit just to see what it’s like. 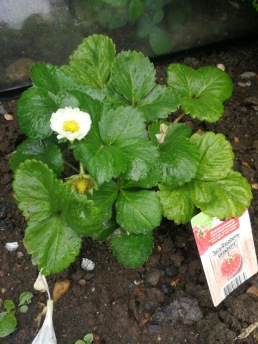 I harvested some potatoes while I was there on Saturday morning. I said last week they were ready and I would start to pull them up this week and I figured I should do at least one job I said I would do so I pulled up 3 plants. I was quite impressed – a couple of fairly large potatoes and overall not a bad haul. I made potato wedges with some of them last night and they tasted pretty good. There are still loads in the ground so Louis and I will either be eating potatoes with every meal for the next few weeks (months?!) or we’ll have to start sharing them with friends and neighbours. (Obviously, as helper number 2 helped to plant them in the first place he’ll be taking lots home.) Either way, it’s great to know we’re eating food we’ve grown ourselves.

While I was harvesting the potatoes I noticed these tomato like fruits growing on the potato plants. I’ve done a bit of research and it turns out they are ‘potato fruit’ (seems obvious) The potato plant produces them after flowering, they’re poisonous and look like green cherry tomatoes. So, at least I know not to eat them!

The cucamelon is growing incredibly quickly. I spent the evening at N. and C.’s on Saturday and C. showed me their cucamelon plant. They have it in a pot growing up a trellis. C. hadn’t noticed there were already 5 or so tiny cucamelons growing on it and we became more and more excited every time we spotted one (I believe, by this point several cocktails had been consumed so getting excited over some cucamelons seemed perfectly reasonable!) 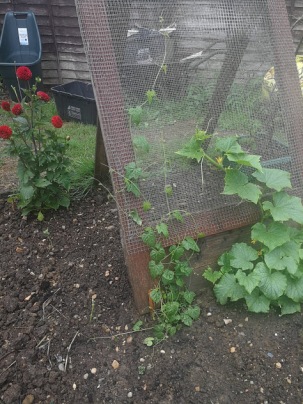 It looks like we’ll be harvesting a bumper crop of blackberries. I cut back quite a lot of the brambles this week – only because, if left they just become so overgrown and unmanageable but I left any branches that had fruit on them. Between the blackberries and the apples I harvested last week we have the makings of some pretty decent crumbles. 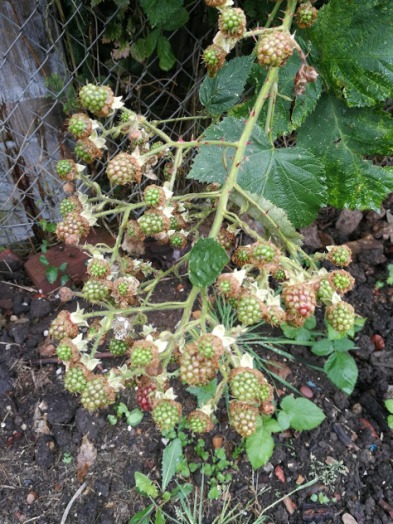 Dan’s been doing a great job covering my paths with grass cuttings and the grass has started to grow but I felt it needed a bit of a helping hand. The grass seed I bought a while back was still in the shed so on Saturday morning I spent some time sprinkling it liberally all over my paths and watering it in. Of course I’m fully expecting to find a perfectly lush, lawn like effect the next time I visit! OK – maybe not but the beginnings of a grass covered path would be good.

As I mentioned earlier, I spent a very pleasant evening on Saturday, sitting in N. and C.’s back garden drinking cocktails. They surprised me with this fantastic tea-towel they’d found on our weekend away in Hove. I did threaten to model it (did I mention we’d had a few cocktails?!) but luckily for everyone present I decided it was a bit nippy for any late night naked gardening (phew!)

Here’s how I left the plot this week. 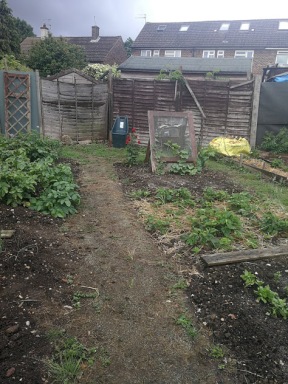 4 thoughts on “Week 75 – Cocktails and Cucamelons”