We’re just over half way through our summer holidays (only another 5 weeks to go until Louis goes back to college) and we are now, definitely in harvest season. This week we’ve picked blackberries, our very first cucamelon, pumpkins, rhubarb, pears, cucumbers and spinach, some of which  I’ve given to friends, some I’ve baked with and some has been stored for future use. 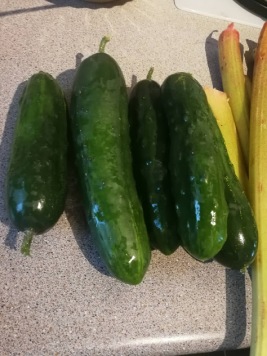 We didn’t make it to the plot for our usual Tuesday visit because Louis and I  had volunteered to deliver a Random Cafe buffet, although, to be fair it was raining so we wouldn’t have been able to go anyway. While we were out I picked up a bottle of gin to make some rhubarb gin. I haven’t started the process yet because I realised I have nothing to actually put the gin and rhubarb in! 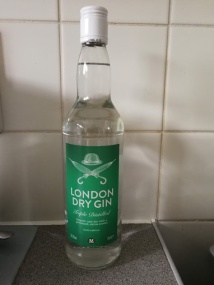 We did make it to the plot on Wednesday instead. My helpers picked the first cucumbers – 5 in all with still lots left on the plant. The pair of them spent ages foraging for blackberries. Despite me hacking at the brambles every chance I get we still have more than enough blackberries and my 2 helpers did a grand job of picking as many as they could reach. I also picked some more when I popped in on my own on Sunday evening (can you ever have too many blackberries?!) They’ve all gone into the freezer as I’ve learned from past experience they don’t last very long even stored in the fridge. I’ll be researching new recipes for them this week – hopefully I can find something new and exciting to do wth them. 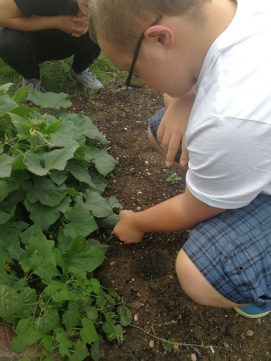 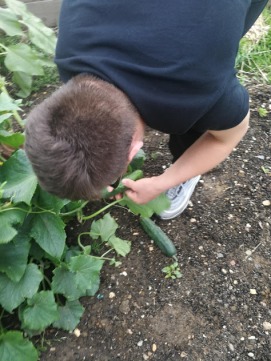 I saw this lovely idea on Pinterest a little while back and really wanted to replicate it on the allotment. I acquired some petal shaped stones and here are my first 2 flowers. I absolutely love the idea of the path but can you imagine how many stones I’d have to find so I’m sticking with the odd flower dotted about the plot for the time being.

I finally found time to install the new ladder on Thursday. I’m so pleased with the end result. It’s gone in above one of the pumpkin plants. This was slightly more complicated as the plant was already quite big and I had a bit of a struggle to trail the stalks up the ladder – the whole point being they grow up the ladder and not across the ground. The process of actually securing the legs in the ground was made much easier due to all the rain we’ve had recently. I was able to simply push the legs into the soil with very  little effort. I think they look great! 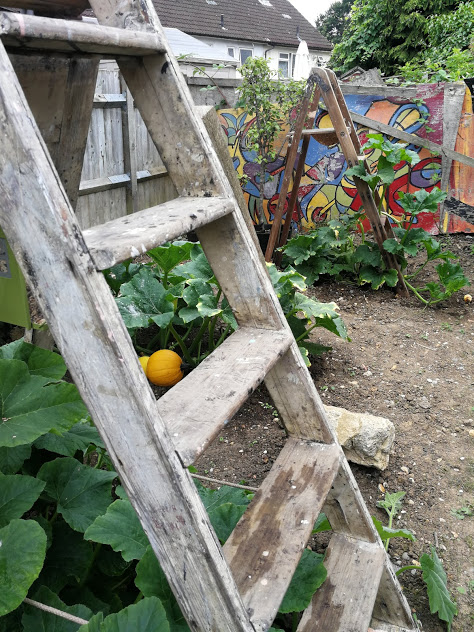 I spent an hour or so at the allotment on Saturday morning with Michelle. I mainly just weeded and took photos but I also picked our first cucamelon, although it would be more accurate to say I caught our first cucamelon as, while trying to see how many tiny fruits we had, I knocked it off the plant. Look how cute it is! I’d read they taste like limes but this one definitely tasted liked a cucumber. 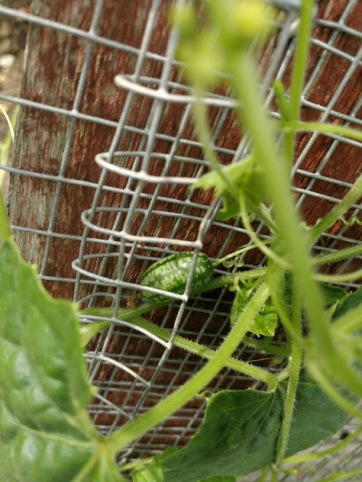 I also picked 2 pumpkins and some pears. I don’t like pears (it’s the grainy texture – really doesn’t do it for me) so I took them to the cafe. Other people really like pears!

Talking of the cafe – on Saturday we celebrated our 2nd birthday. Michelle very kindly picked some gorgeous dahlias from her plot which looked lovely on the table (when we’d finished we left them with the community centre staff so they are now making the reception area look pretty)

The birthday celebrations were a great success – lots of cake, including a wonderful rainbow cake made by one of the volunteers and an incredibly positive speech by the deputy mayor. Happy 2nd birthday, Random Cafe! 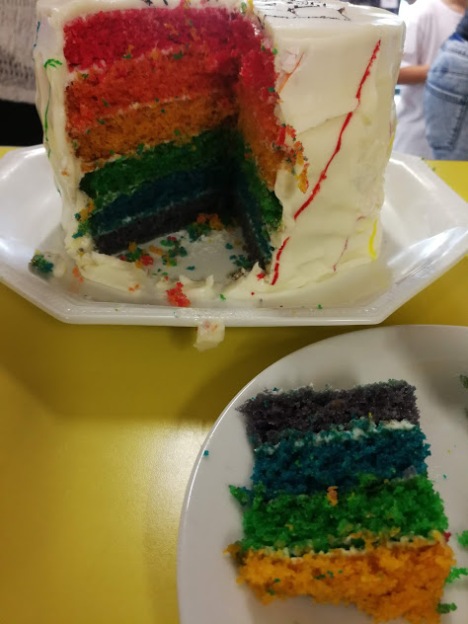 We continued the celebrations at the pub on Saturday night so it came as a bit of a shock when I was hangover free and able to attend the local bootsale with J. on Sunday morning. We always enjoy wandering round the bootsale but this week was especially fun as we both found lots of great bargains. Nothing gardening related apart from this book which, having had a quick flick through looks like it could be quite helpful.

After some advice from both Michelle and J. I pinched off the tomato plant this week. It had a lot of growth on it and was looking decidedly leafy. The idea is to pinch off the smaller shoots, thus leaving more energy for the larger, more established shoots which in turns means bigger tomatoes over a longer period – quality not quantity. That’s the theory anyway – we’ll wait and see if it works. The first photo is what it looked like last week and the second photo was taken after Michelle and I pinched out the extra shoots!

As you can see from the photos I already have one ripe tomato. On Thursday it was more of an orange colour with a green top but by Sunday it was a wonderful bright red. I left it on the plant hoping some of the others will follow its lead so I can harvest more than one. 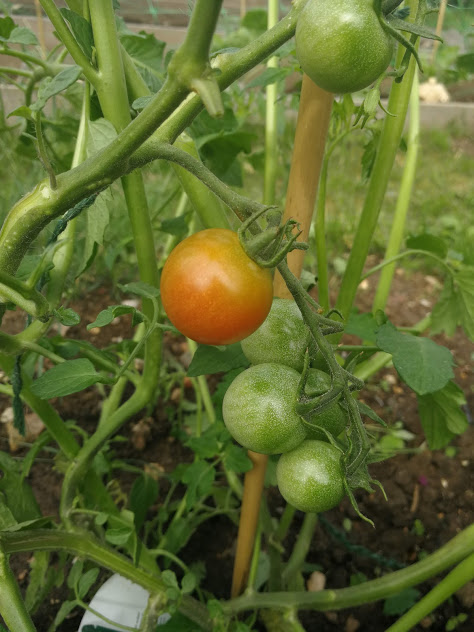 I had a quick visit to the plot on Sunday evening to water everything and take some photos. I walked into the shed and was confronted by this!

Seriously, I nearly had a heart attack! Although when I realised what it was I had a quiet chuckle to myself. I messaged the allotment group to say what had happened and Richard, my allotment other half apologised for scaring me but was happy to know it worked and hopes it scares the pigeons as well as it scared me! (not sure it’s going to scare many pigeons in the shed though, Richard!)

Rhubi’s looking good. I removed quite a few rotten stalks from underneath – I had no idea they were there until I pulled some stalks off. I wonder if, like the tomato plant removing these will improve the quality of the remaining stalks? 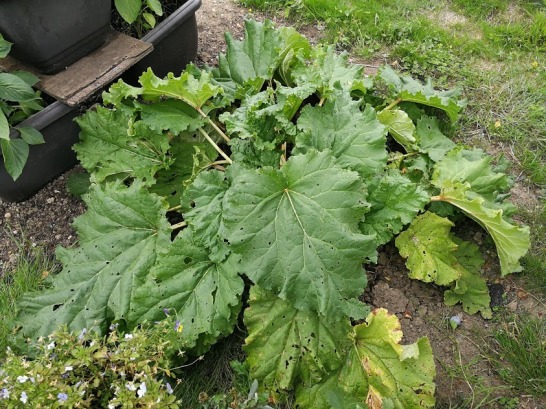 I harvested a few stalks and made another rhubarb crumble cake – this time I added a little bit of crystalised ginger to the mix. 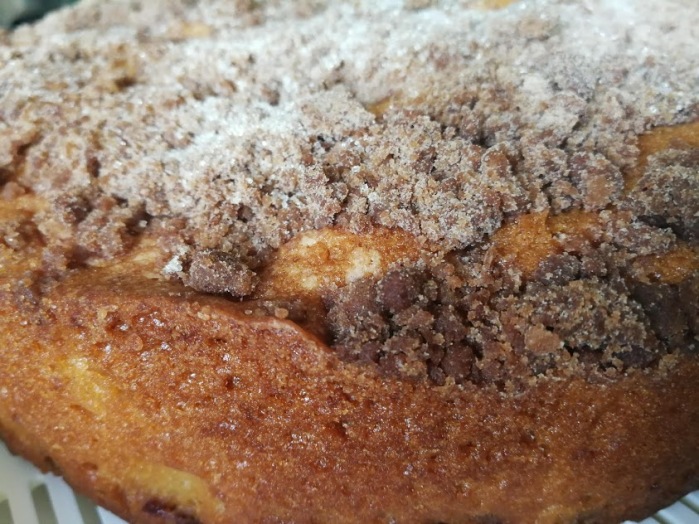 This is how I left the plot this week. Happy with the progress over the last few days. 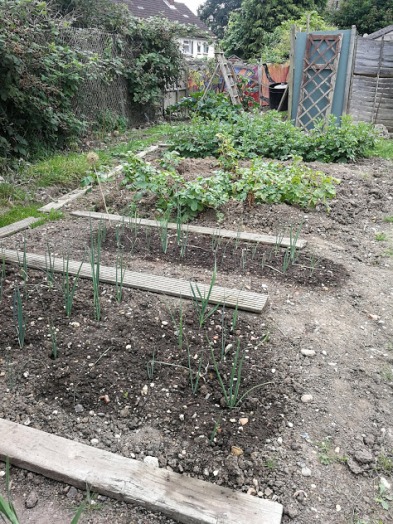 One thought on “Week 77 Harvest”