If I was lapse a couple of weeks ago, this week I’ve been positively neglectful. I’ve been to the allotment a total of once this week and that was for about an hour on Friday morning. To be fair, the reason I haven’t been on the plot is because we’ve been away a lot. We spent the start of the week in Norwich. We had a really lovely couple of days mooching round antique shops with my sister and brother in law. (We also spent quite a lot of time stopping for food too!) 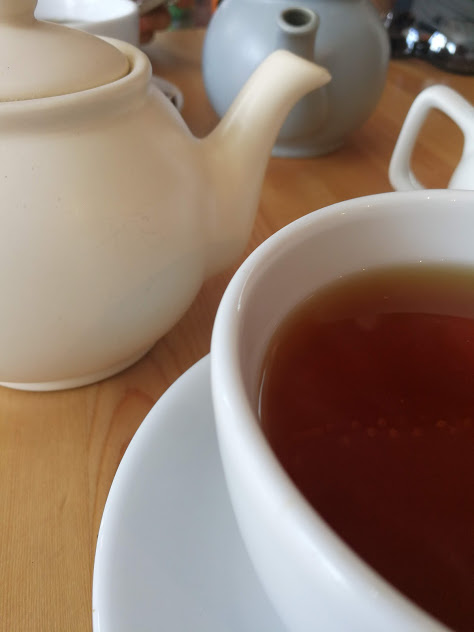 On Tuesday we visited Scratby – a seaside town I’d never heard of and based on how many people were on the beach hardly anyone else has either! Unfortunately, within about an hour of us laying our beach towels down it started to rain – heavily enough to clear all but the hardiest of beach goers from the beach. It was one of those really annoying days when within 20 minutes of leaving the beach, we had bright sunshine again, but it looked like it could start to rain again at any minute. So we didn’t make it back to the beach but we did enjoy wandering around and eating icecream. 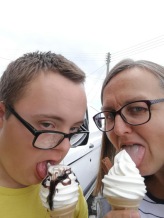 I really felt like I should visit the plot at least once this week so I met Michelle on the plot on Friday morning. It was a real flying visit – I watered, did a small amount of weeding and harvested some spinach. I’m really pleased with how well the spinach is doing. I chose to grow it this year as I use it most mornings in a smoothie and it freezes really well so there’s no waste.

Talking of waste, J. (from Random Cafe) and I spent Thursday at a Tesco Community Cookery School. It’s a joint initiative between Jamie Oliver and Tesco to help people involved in projects like ours learn how to make the most of the food donations we receive. We were taught how to make 3 sauces – a tomato sauce, a curry sauce and a white sauce all with the idea of using as much veg as possible. It was a really interesting day and, if nothing else I learnt how to chop vegetables properly (and we were both given a goody bag with loads of neat stuff in!)

Rhubi has made a strong comeback after harvesting. I’ve had a little sniff of the rhubarb gin and it smells great. I don’t think it’s ready yet – I’m going to leave it for another couple of weeks before I try it. I may attempt making a rhubarb and raspberry one next. 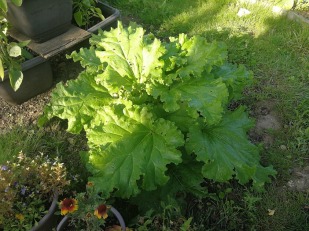 The sunflower finally has some height. It’s pretty tall now but as we’re nearly at the end of August with still no flower it’s all a bit too little too late!

Cucamelons are still doing well with loads of fruit. All at different sizes too so it looks like I may have a steady supply for my gin.

No cafe for me again this week as we headed off to Hereford on Saturday morning. We’re staying with our friends, S. and K. who we met on holiday in Majorca in 2009. Since then we’ve been on holiday with them twice and visited them a few times and they’ve been fairly frequent visitors to London/Watford over the years including Louis’s 18th birthday last November.

We spent Sunday in Stratford Upon Avon. I’d visited Stratford last November to do some christmas shopping and managed to miss half of it! I saw the famous theatre but didn’t walk any further so I completely missed the canal and river. I saw both during this visit – infact we took a boat trip on both of them and it all looked so gorgeous in the sunshine. It was a boiling hot day (to be honest, a bit too hot for me) so we took every opportunity we could to sit in the shade and have a drink or icecream. It was lovely to spend time with S. and K. and just sit and relax with them and watch the world go by. We saw Shakespeare’s house and Louis had his photo taken with a knight. 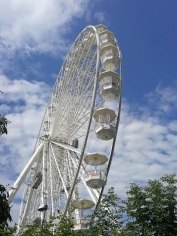 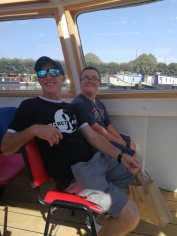 I am writing this in S. and K.’s garden admiring a very generous crop of (admittedly) green tomatoes. I’m very envious as I have totally failed to tame my tomato plant so mine does not, in any way shape or form look like this one which is incredibly neat and tidy. I must try harder! 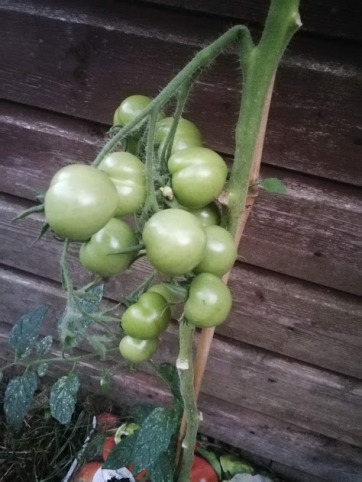 Something else which aren’t neat and tidy are the pumpkins and squashes, although, in my defence no one expects squashes and pumpkins to be tidy – they will always be a big jumble and a mess. I have, however done a pretty good job of training them up the ladders. Not loads of fruit yet but, as ever I’m hopeful.

I have more fruit on the strawberry/raspberry plant which, after tasting one I’m just going to call the extra strawberry plant. Anyway, whatever it’s called I have fruit on it which is way better than the main strawberry plant which has produced a pitiful amount of fruit. It has, however had so many off shoots it has almost doubled in size so I’m hopeful that next year we’ll have a bumper crop. There is definitely something about gardeners and optimism! 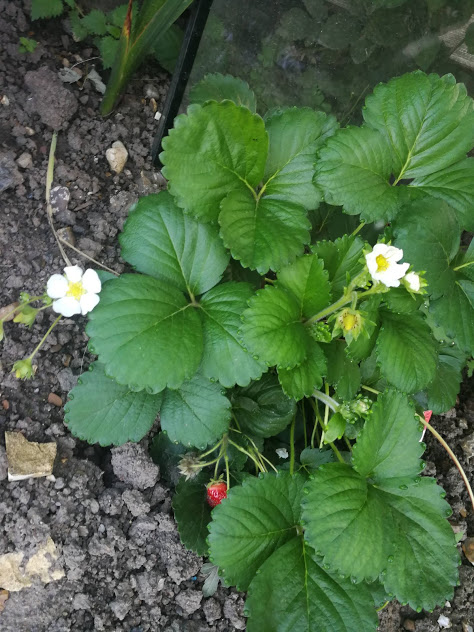 Seriously pleased with how many peppers we have at the moment – there are LOADS! Unfortunately, they’re all green (my least favourite coloured pepper) 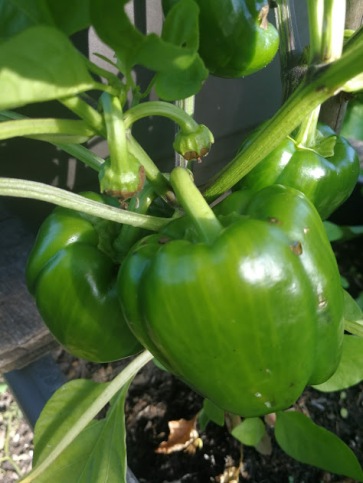 So, after doing almost no work on the plot this week, this is how I left it. No more (planned) trips for us this summer although I have been known to spontaneously just jump in the car and see where we end up so it may not yet be the end of our travels. Spontaneous journeys aside I should have more time to really concentrate on the plot over the next couple of weeks so I’m hoping to fit in a major weeding session to tidy the plot up a bit. 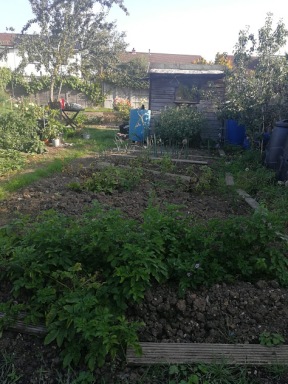